The Great Fire at Waldershare Mansion in 1913 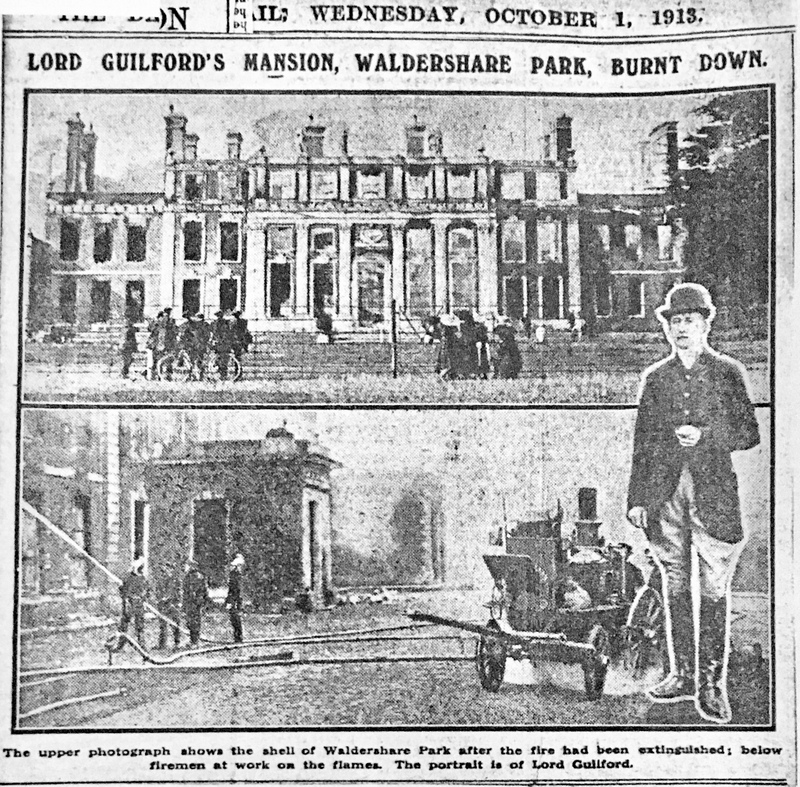 Image shows a newspaper article following the fire at Waldershare 1913.

Disaster struck Waldershare mansion during the installation of electric lighting during the evening of Monday, 29th September 1913, when a fire started in the roof space and rapidly spread throughout the entire building, reducing it to a smouldering ruin. The alarm was raised by Mrs. Wade, the housekeeper, and the Earl of Guilford telephoned the Sandwich Fire Brigade for assistance. By the time the fire appliances arrived from the nearby towns the blaze was too intense to be extinguished by the rudimentary equipment available, and so instead attention was given to saving as many possessions as possible. Around 80 family portraits, many painted by eminent artists were saved. Paintings that formed the Furnese collection of portraits were amongst the 50 or so paintings lost in the fire when one of the vast water tanks in the attic came crashing through the ceilings below, carrying the burning timbers with them. Clad only in his vest and trousers, the Earl had rallied the estate workers and domestic staff, mostly in just their night clothes, to rescue as much of the contents of the mansion as possible and take them to the safety of the lawn. Most of the paintings, furniture, books and even the grand piano were saved. At the time, Lady Guilford was in Hertfordshire and the children were at Westcliff-On-Sea.

After the fire, all that was left of the main building were the walls and the architect Sir Reginald Blomfield was commissioned to rebuild the mansion. At that time, he was renowned for renovating country houses and the construction of new ones on a palatial scale, but today he is probably best known for his war memorials. His remit was to rebuild the mansion in a close replica of the original Inigo Jones-inspired structure. The new mansion differed in only minor details: a higher roof line to accommodate the servants’ quarters dormer windows and to give a less “squat” appearance to the building; a tile roof (instead of the original slate); enclosed chimney stacks at both wings and relocated main staircase. The life-size lead statues on the roof representing Saturn, Venus, Jupiter and Mars overlooking the lawn had melted in the fire and were re-cast.

The Deal, Walmer & Sandwich Mercury newspaper reported on the incident of the Great Fire printed on Thursday October 2, 1913:

“Almost midnight on Monday, a disastrous fire occurred at Waldershare Park, reducing the ancient and beautiful mansion to a heap of ruins. The sleeping household was roused at 11.30 when the outbreak was noticed by the housekeeper. A message was telephoned to Sandwich and Supt. Stone and a goodly number of the police force were quickly on the scene and rendered much valuable aid. The Eastry Fire Brigade were called and the engine and brigade under Capt. A. E. R. Kennedy were soon en route to the scene and the distance (nearly five miles) was covered in a commendably short time, the engine and brigade from Sandwich being subsequently called, and following almost two hours after.

Meantime Lord Guilford led the servants in an attack on the fire with the appliances in the house, but the flames had got too firm a hold of the roof, which was burning so furiously that their efforts to keep the fire from extending were futile. The flames had spread very rapidly, and the Brigades, on their arrival, found nearly the whole mansion involved. They soon had their hose playing upon the burning mass, but almost immediately the roof collapsed, and then any hopes that might have been entertained of saving the mansion were given up and the firemen at once turned their attention to saving the spacious stable buildings adjoining the north wing, which were in danger of catching any moment, and the strenuous efforts of the two Brigades prevented the spread of the conflagration to that part of the premises.

The firemen and the estate workers laboured hard, but the mansion was utterly destroyed, and all that is left standing is the shell of Waldershare Park House, and a portion of the north wing and the stables, one of the ”Stately houses of England” being hopelessly raised. Much sympathy has been extended to the Earl and Countess of Guilford in the calamity, which has befallen them. Happily many articles of furniture on the first floor, including a grand piano, valuable old portraits, tapestry and silver, were saved by his lordship and the servants before the roof collapsed. It has not been possible to ascertain with certainty the cause of the outbreak, the conjecture being that a light may have been left burning by workmen who have been putting in electric light in the top of the building.”

We went over to Sibton with Margaret this afternoon, and just as we got there a telegram came from Guilford with the appalling news that Waldershare was burnt down last night. We hurried over and found the most terrible scene of desolation, only the smoking walls of the dear old house standing, groups of tired out blackened people helplessly watching the ruins. Guilford quite calm, but looking heartbroken, he had only trousers and a coat on as he had been roused at midnight, had no time to dress, and had been working ever since rescuing what he could from the flames. All the historic furniture, pictures and tapestry, Vidie’s jewels, and the old books have been saved, but al her clothes, furs are gone, all the servants’ things and every bedroom was destroyed with all the contents. I found Guilford in the stable yard. He put his arms round me but could not speak. Vidie was at the farm, very calm and quiet.

The situation is incredible; I am stunned by it. The children were away at the seaside so they were saved the shock of being carried out of a burning building at midnight. We stayed for a little time and induced poor Guilford to lie down on a sofa and go to sleep.

We went over to Waldershare early this morning and saw the running; they are still smoking and the firemen still playing water over the ashes. The house is a mere shell: gaunt walls standing up with big holes where the windows were. I walked around the house with Muriel, she was terribly upset. We looked in at the front door, the marble busts of the Duke of Wellington and the old earl were lying all broken and calcined in the debris, they were too heavy to save.

The servant’s staircase at the end is intact; we went up as far as the second floor and looked down into the horrible pit of smoking ashes, twisted pipes and water tanks, masses of molten lead, bits of charred beams, fenders, fireplaces, all the upper part of the huge house fallen into the bottom. I went to look at the things that were saved but the best have gone, the glorious paneled oak parlour is utterly destroyed. The portrait of lady Rockingham in her coronation rises of Queen Anne’s period was one of the first things to go, and everyone is glad for it was she who brought the curse into the North family along with the Waldershare estates. Now that she is burnt perhaps the curse will be lifted.

We sent the afternoon in Canterbury, shopping; we saw photographs of the rings of poor Waldershare, a sad sight. They are being sold in many of the shops.

We went over to Waldershare by train. Bobby Dickson is there helping Guilford. Bobby knows more about the value of furniture, pictures etc. than anyone else. Guilford looks very ill and terribly depressed, now that the excitement has worn off he is feeling the shock more acutely. Vidie too looks very worn. It will take two years to rebuild the house, and they think of taking a house in Canterbury. At present they are in the farm; the children are still away.

From the diary of Mabel Eden, further details were found when she has given dates in reference to the rebuilding of Waldershare mansion after the fire.

27th June 1914 – The rebuilding of the mansion at Waldershare has begun.

10th September 1915 – The rebuilding of the mansion has finished.

3rd December 1915 – Waldershare mansion has been furnished, furniture not arranged.

15th June 1916 – The family have moved back into the mansion

24th July 1916 – Visit to the family at Waldershare mansion

Despite the severely restricted the manpower available due to mobilisation for the first world, a sympathetic, year-long rebuild of the original mansion started in 1914, resulting in a visually more elegant structure with vastly upgraded facilities and much improved sleeping quarters for the domestic staff.

The new structure incorporated the latest techniques to reduce its vulnerability to fire with steel girders supporting fire-retardant concrete slabs to separate each floor.

Following the fire, suspicion was initially directed towards the civil disturbances carried out by the Suffragettes during their struggle to promote female franchise. By 1870, the campaign had developed into a national movement of women campaigning peaceably for women’s rights in a male-dominated world, attempting to effect change by constitutional means. But after the defeat of the Women’s Suffrage Bill in 1903, some members felt progress could only be made by violent protest and the suffragette movement gained momentum. Their radical tactics included setting fire to churches and country houses and it was assumed by the media that the fire at Waldershare was another arson attack by the Suffragettes as can be seen in the following newspaper cutting from the San Francisco Call, but Lord Guilford remained convinced that the most likely cause was an unattended light left in the attic space by the workmen who were installing electric lighting to the building.