Popes Hall and The Wilderness 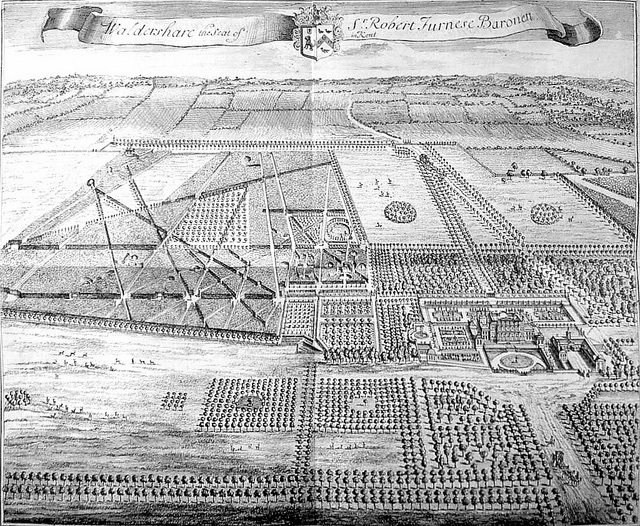 Image shows a plan of Waldershare produced by J. Kip in 1719, dedicated to Sir Robert Furnese.

According to Charles Igglesden’s 1927 ‘A saunter through Kent with pen and pencil’, prior to John Monins’ first mansion on the site of the current one, there had been a manor house and associated church at Popes Hall in 1274, which had featured in Henry Malmaine’s will. An old manuscript gives information that a vicar of Coldred was allowed a certain sum for the maintenance of a chaplain at the nearby chapel. Charles Igglesden wrote: “Until eighty years ago an old house known as Pope’s Hall, or Popsall, was to be seen along Singledge Lane, practically opposite the present Guilford Colliery. But one day an owner of the Park, finding that the old house was in the line of vision from his mansion, had it demolished.”

A headstone (photo below) in All Saints, Waldershare churchyard for John Pain, who died in 1821, states he was from Popes Hall, and, indeed, both the chapel and Popes Hall appear on the OS map from 1816. However, neither the chapel nor the house appear on the 1899 OS map, only to reappear on the 1907 and subsequent OS maps marked as “site of Ponshall House” and “site of Chapel”; as may be seen on John Pain’s headstone, it was still “Popes Hall” in 1821; if Charles Igglestone is correct, both buildings were demolished in the first half of the 1800’s, probably at the behest Francis North, 6th Earl of Guilford. It would appear that at some time after 1821, the name was changed to “Ponshall”.

Edward Hasted mentioned “Popeshall” (or Popshall) when he researched Kent and wrote his celebrated book ‘The History and Topographical Survey of the County of Kent: Volume 9 (Canterbury, 1800). He noted that “the manor of Popeshall or Popshall as it was comonly called, or even Copsall, was situated at the eastern boundary of the parish of Coldred, adjoining Waldershare Park. In the Domesday Book it was written as Popeselle and was said to be part of the possessions of Odo, Bishop of Baieux. ¶

The same Osbern (son of Letard) holds of the bishop, Popeselle. It was taxed at one suling. The arable land is. . . . . . In demesne there are two carucates and one villein, with four borderers, having half a carucate. Two freemen held this land of king Edward. A certain knight of his held half a yoke, and there he has one carucate in demesne. The whole in the time of king Edward the Confessor was worth sixty shillings, and afterwards twenty, now one hundred shillings. In Beusberge hundred, Radulf de Curbespine holds half a yoke in Popessale, and there he has three oxgangs of land. In the time of king Edward the Confessor, and afterwards, it was worth four shillings, now eight shillings. Uluric held it of king Edward.”

Hasted also states that Henry Malmains mentioned in his will that the church of “Popeshale”, had been given legacies and in a manuscript of Christ Church, Canterbury, the pension of the vicar of Coldred Church was assigned to the maintenance of one chaplain at “Popeshall”. Both the churches of Coldred and “Popeleshale” belonged to Dover Priory. “The foundations of the chapel were still to be seen at a small distance from the manor house. There was a portion of tithes arising from seventy-six acres of the manor of Popeshall, which belonged to the Abbot of Langdon. It is now the property of the Earl of Guildford.”

In the Autumn of 1998 edition of the Kent Archaeological Review, Popeshall Manor, Coldred, is mentioned in an article that was written by Keith Parfitt;

“The manor house remained in regular use until the 19th century and it is clearly marked on the First Edition one inch O.S map. In the graveyard of Waldershare parish church there are several headstones, dating from the period 1801-1832, which commemorate the Pain family, who are recorded as being ‘of Popeshall’. Today all traces of Popeshall have disappeared. The site of the mansion now stands within the grounds of Waldershare Park and is marked by a small oval area of rough uncultivated ground covered with trees, surrounded by arable land. A visit in September 1997 revealed that a number of the trees had blown over (probably in the hurricane of 1987) and several walls were visible in the upturned root bases. Sections of three separate walls, all aligned north-east by south-west, were noted. None of these was more than 30 cms wide and all appeared to be of post-medieval date. Two were of mortared red brick, perhaps Tudor in date, whilst the third was flint-built.

Formal gardens, tree lined avenues and The Wilderness were laid out by Sir Robert Furnese in 1719, with much of the parkland planted with beech and Spanish chestnut. Many trees were lost during the hurricane in August 1836 and Kip’s plan, below, of both the mansion and its grounds differ greatly from the layout today. None of the formal plantations surrounding the mansion still exist and the mansion and outbuildings have undergone considerable remodelling. Following modifications made by Sir Reginald Blomfield during the 1915 rebuild of the mansion after the 1913 fire, only two walls remain from the original stable courtyard shown in the extract below from Kip’s plan.

After the death of Dudley Francis North, the 7th Earl of Guilford, in 1885, the Dowager Countess, Lady Georgiana, embarked on a major refurbishment program of the mansion during which the main entrance was moved to the rear (the north west side) with the addition of an entrance porch (built in 1890). What had originally been the entrance and carriage turnaround on the north west side was laid to terraced lawn. The image above shows the ongoing work to achieve this.