History of the Tilmanstone Colliery Branch of St. John Ambulance 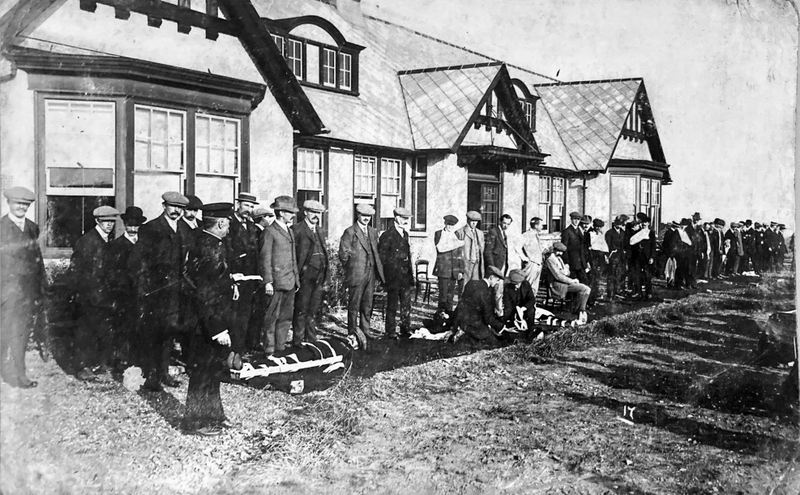 The St. John Ambulance Association is a foundation of the Grand Priory of the Venerable Order of St. John, and came into existence in 1877. Certificates of proficiency in first aid were given after attendance at lectures and examinations were granted also in 1877, with the first manual of first aid instruction being published by the St. John Ambulance Association in 1878, written by Surgeon-major Peter Shepherd, M.B. (1841-1879), who was a British Army Doctor and officer.

In 1887, the St. John Ambulance Brigade was established by the Order of St. John. The training and teaching of miners, railway workers and policeman began and in 1879 the St. John Ambulance Association introduced a system of re-examination for higher awards. Many groups were formed into units at various centres of training and they provided ambulance stations at National and International exhibitions where large crowds would be assembled.

The Tilmanstone Colliery Branch of St. John Ambulance became one of the first St. John Ambulance Brigades in the Kent Coalfield communities. One the prime supporters of the bridge at Tilmanstone Colliery was the colliery owner, Richard Tilden Smith, who was responsible for purchasing, supplying and allowing the construction of a training hut to be erected on land close to Elvington and Eythorne Primary School, on Church Hill, at Lower Eythorne. A levy was made for one penny to be donated from every Tilmanstone Colliery miners wage packet, which was later increased to three pence after the introduction of decimalisation in the 1970s. The appointed Superintendent of the Tilmanstone Colliery Division was Mr. W. J. Bailey. The Division had its own ambulance, which could also be used for any local people, who were sick or injured in addition to its main use for the Tilmanstone Colliery miners. It has been stated that Richard Tilden Smith had donated the first ambulance to the Division, which had been on this own Rolls Royce cars. One of the drivers of the ambulance was a Mr. Topliss. On 17th October 1928, the first of the first aid training classes was held at the Eythorne Detached Centre, which consisted of six lectures and twelve demonstrations. Twenty-four members attended this first classes, and the examination was held in the Elvington Council School on 6th February 1929, when twenty-six candidates took the examinations. The lecturer was Dr. MacMaster, the examiner was Dr. D. L. Hamilton, and the demonstrator was Sargent Fox.

Richard Tilden Smith had realised the benefits of men at the colliery being trained in first aid. He actively encouraged men from the colliery and the surrounding local community to attend lectures in first aid, which was offered by the St. John Ambulance. It soon became a tradition for the local Kent colliery first aid and rescue teams to compete in local and national competitions against the the Police and Fire Brigades, as well as other collieries across the country. At first, the Tilmanstone Colliery teams were renowned for doing very well in these competitions, but later the Betteshanger Colliery teams became the team to beat.

Sadly, the Tilmanstone Branch of St. John Ambulance saw a huge reduction in its level of funding a lack of funding following the closure of Tilmanstone Colliery in October 1986. The Branch did manage to remain open until October 2000, when sixty guests attended the closure of the hall at Eythorne. As a result, the Division became a Fellowship, or supportive arm of the St. John’s Order, which was run by ex-Superintendent, Bunny Worthington, who was awarded the honour of becoming a Serving Sister of the Order of St. John.