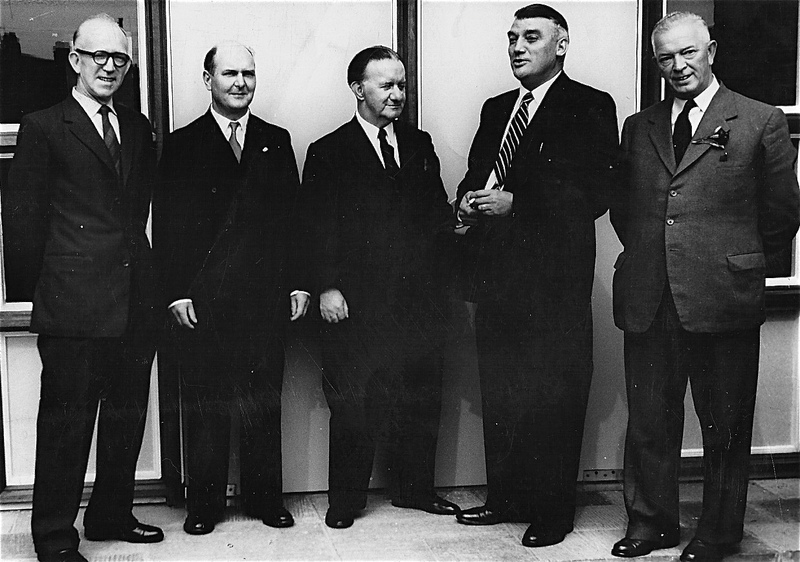 Image shows representatives at the official opening of Elvington Welfare Hall in 1959.

Elvington Welfare Hall was built by D. C. Heard & Company in 1959, having been designed by the architect D. H. Seabrooke, and the building was officially opened by Mr. H. Atkinson, Chief Officer of C.I.S.W.O. (Coal Industry Social Welfare Organisation) on 22nd August 1959. The hall had been built in Elvington for the mining community of that was located near Tilmanstone Colliery. The land on which the Welfare Hall was built had formerly belonged to the Tilmanstone Colliery Welfare Scheme charity, which was made in conveyance on 3rd February 1941, between the Elvington Tenant’s Ltd., Francis Digby Mottramand three others, alongside another adjacent piece of land. The same land had formerly belonged to a different charity and was made in conveyance on 22nd February 193

The hall cost £12,000 to build and the money had been granted by C.I.S.W.O. and the Ministry of Education. The floor of the hall was made of Japanese Maple, which was special imported and was used specifically to stand up to the anticipated hard wear. The Tilmanstone Colliery Welfare Committee provided a further £500 for the necessary furnishings, cleaning machines, microphones circuit, crockery and kitchen facilities. The hall also had a stage with curtains and behind them were changing rooms, which were made to allow for theatre productions to be held in the hall.

The Colliery Welfare Committee established three basic principles for the use of the hall, which meant in order that children might accompany their parents to functions, the sale of intoxicants on the premises would not be permitted. The hall would be made available to any recognised organisation without discrimination on the grounds of political, or religious beliefs. The decision was Ade that the hall would not be hired to any individual running a function for private gain.

Some of the activities that were regularly held at the hall included the County Library and Child Welfare Clinics, regular meetings of the Eythorne District Darby and Joan Club, the Eythorne and Elvington Branch of the Women’s Institute, the Welfare Dramatic Group, and a Welfare Badminton Club. The various sports teams would often hold their dances, social meetings and whist drives in the hall, along with the Youth Club. The Tilmanstone Branch of the National Union of Mineworkers (N.U.M.) held their general meetings in the hall as and when required, and it was also used for many local family wedding receptions. The hall was used as the official inspection and stamping section for the area by the Weights and Measures Department for Kent County Council. To help encourage smaller organisations, the hire charges for the hall were kept low, and the upkeep of the building was subsidised from the organisation from the Tilmanstone Colliery levy.

After the closure of the colliery, the hall was donated to the people of Elvington. However, the community was unable to generate enough money from the hiring of the hall and the facilities to cover the maintenance costs, which eventually led to the hall falling into disrepair. The site was boarded up in 1992, and in December 1997 was gutted by a fire. In August 1999, a newly built community centre was officially opened by local Labour M.P. Gwyn Prosser. The new Elvington Community Centre was rebuilt and fully refurbished with the whole scheme costing £320,000, which was funded by Eythorne Parish Council, the district councils, the Rural Development Commission, English Partnerships, and slice of the Government’s Single Regeneration Budget. The building held a regular health clinic, rear car parking, an all-weather sports court, and a specially designed computer upstairs suite, which is served with access by a disabled lift. The centre started its first computer courses in 2000, with 12 computers being paid for by the RR Grant, and four more provided by UK Online. Computer courses were provide by Skillnet, with sessions on Mondays, Wednesday and Thursdays.

The computer room has since been occupied by the Elvington and Eythorne Heritage Group, which was formed as a group in 2011, and the room began to be occupied by the group in March 2013. The heritage group is responsible for collecting archiving and displaying the heritage of the parishes of Eythorne, Elvington, Waldershare and Tilmanstone Colliery.