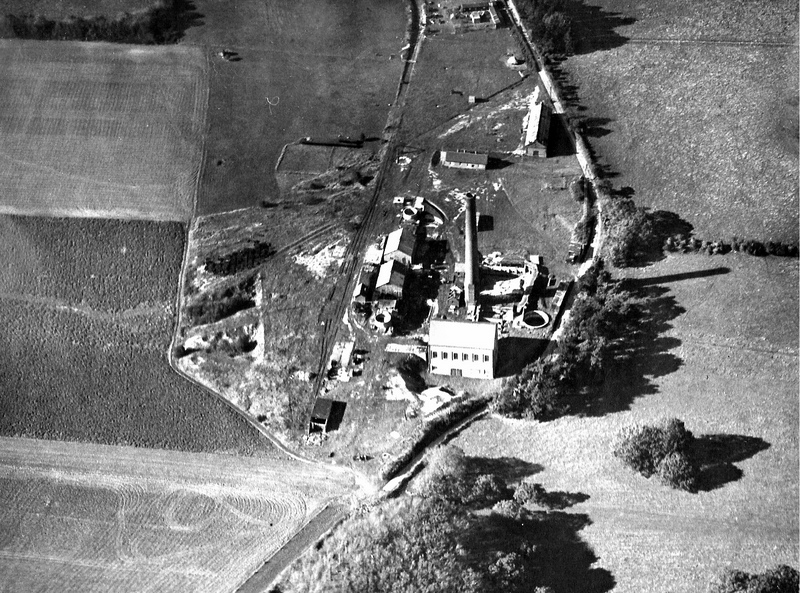 Image shows an aerial view of the site of the Guilford Colliery, near Waldershare.

In 1855, Godwin-Austen suggested the possibility of a continuation of the Continental Coal Measures beneath the Channel and into the south of England. Geologists had first speculated that there was coal beneath Kent from as early as the 1840s, following the discovery of coal at Oignies, in France. This resulted in the development of the Pas de Calais Coalfield and by 1852 there were collieries established at Lens, Bruay and Courrieres in France and Belgium. In 1880, work began at Shakespeare Cliff on a Channel Tunnel from Dover to Calais, but in 1882, the Government halted the work while it considered the military implications. The company then decided to drill bore holes to investigate Kent’s geology and both iron ore and coal were found in 1890. In 1896, Arthur Burr set up the Kent Coalfields Syndicate buying the mineral rights and commenced Shakespeare Colliery at the tunnel workings. The sinking of the No.1 shaft (The Brady Pit) took place in June 1896, with boreholes. Two further shafts were eventually sunk.

Over the next 25 years the Kent Coalfield came close to being abandoned on numerous occasions. From 1896, more than 40 test bores were carried out across Kent and at least 10 collieries were started, but it would take a further 16 years of continual investment before any commercial coal was raised to the surface at any of the Kent collieries. In 1904, the Dover Coalfield Extension Limited was formed and assumed the guise of the Kent Coal Concessions Limited. The Kent Coal Concessions was formed to purchase the assets and liabilities of the Dover Coalfield Extension Limited, from its liquidator; and for the purpose of acquiring and developing mineral areas in Kent. The first boring under the contract of the Kent Coal Concessions was at Waldershare on land adjoining the main park estate. The site had been selected by Professor Boy-Dawkins, who stated “Coal Measures are likely to be struck at this spot, either directly below or within a short distance of the bottom of the Gault”. The boring was started in January 1905, by Messrs. A. C. Poter & Company, who bored down to 1,409 feet, before the work was then passed onto Mr. John Thom, who bored down to 2,863 feet. However, due to a later delay in getting any definite results of coal at the Waldershare boring a further company was formed. On 18th April 1906, the Foncage Syndicate was registered by Arthur Burr as a small subsidiary company of Kent Coal Concessions to undertake surface works and a small amount of shaft sinking at what became Guilford Colliery and Snowdown Colliery, even prior to any coal being discovered in the Waldershare boring.

The first seam of coal struck at the Waldershare boring occurred on 19th September 1906, finding a 1 foot x 8 inch thick seam of coal at a depth of 1,818 feet 7 inches. However, it estimated the true trend of the coalfield had finally been located and was named the “Welcome” Seam. On 27th September 1906 a 3 feet x 4 inches seam was found named “Alexandra”. On 18th October 1906, a 4 feet x 6 inch seam was named the “King Edward”. The Waldershare boring did show the existence of a valuable bed of fireclay underlying the 4 feet x 6 inch seam, which was considered to be “of a very exceptional quality equal to the best Staffordshire clays.” On 2nd August 1907, the Guilford Syndicate, Limited was formed to take over from the Foncage Syndicate and all its rights and interests in the Guilford (Waldershare) Colliery, which comprised 1,500 acres. The Foncage Syndicate concluded its activities in 1908.

The Guilford Colliery was situated along Singledge Lane, which separates Waldershare Park and was approximately a mile and half from the Waldershare boring. The first shaft at the colliery reached 300 feet by October 1906. A capital of £20,000 had originally been created in order to provide a starting point for two 18 feet wide shafts to be sunk, along with providing the necessary sinking plant and surface equipment. It was not initially thought it would be possible to complete the sinking of the shafts with that initial capital as the company only intended to carry on in the hope of selling the colliery at a substantial profit. Singledge Lane was, and still remains, a narrow country roadway and was not originally constructed to carry the traffic it saw during the early years of the construction of Guilford Colliery. Compensation claims were made by the local council, so it quickly became necessary to suspend operations. Plans were made for the construction of a railway that would supply the necessary building materials from a link to the South Eastern and Chatham Railway. The eventual construction and development of the East Kent Light Railway finally linked Guilford Colliery five years later. Unfortunately, during that period of time, work had to be frequently suspended for months at a time.

In May 1907, the No.2 shaft had been sunk to 30 feet and the No.3 shaft had been sunk to 265 feet. At this time, a prospectus was prepared for The Guilford (Waldershare) Company, Limited, with a capital of £300,000, but it was however unable to raise the necessary working capital and the whole scheme was abandoned. As an alternative, the Guilford Syndicate was formed, which relieved the Foncage Syndicate of its responsibilities and refunding its cash expenditure and enabled work to be resumed at the Guilford Colliery. In July 1907, a circular explained that “Upon completion of such sinking it is suggested that the undertaking shall be sold to a company… As a suggestion, a sale price of £500,000 would not be unreasonable”.

The seven feet exploratory shaft at Guilford Colliery was enlarged to 12 feet and was used for the water supply to the colliery. The No.2 shaft remained at a depth of 30 feet. In October 1908, the No.3 pit was sunk further to 752 feet until work was suspended again due to the condition of Singledge Lane. In December 1909, preparations were made to continue sinking the No.2 shaft as no real progress would be made without having a second shaft. By May the following year No.2 pit had reached a depth of 270 feet, at which point sinking was suspended allowing for the introduction of more powerful winding engines, as the existing engines had reached their capacity. A further company was formed to take over the Guilford Colliery, which was made in July 1910, by the Guilford (Waldershare) Coal & Fireclay Company Limited. The sinking of the shafts was resumed and by the end of 1910. The No.2 shaft was down to 480 feet and No.3 shaft was at 850 feet. It was not until November 1911 that both shafts had been brick-lined to a depth of 900 feet. It was later necessary for two Evans double-acting ram pumps to be installed in an inset at 613 feet, these gave a combined capacity of 800 gallons per minute.

During 1912, no sinking occurred at Guilford Colliery, as the managers of the colliery were too involved with the hope of marking time until there was a direct link with the South Eastern & Chatham Railway. The East Kent Light Railway had reached the colliery in October 1912, having taken a spur from Eythorne Station. The shafts sinking operations continued with the No.2 shaft reaching a depth of 1,272 feet in February 1914 and the No.3 shaft reached a depth of 1,269 feet. A side gallery had now been excavated in the No2 shaft at 1,264 feet with a borehole sunk to test the strata for further sinking. However, water was encountered at 1,316 feet with 300 gallons of water per minute flowing up the tubes. This was dealt with by winding and the borehole was continued. A vast amount of water mixed with sand came up the tubes and the borehole was closed before the shaft entered the coal measures. It had become too difficult and expensive to sink the shafts any further to attempt to reach the coal measures and the company was finding itself in some financial difficulties. On 14th March 1914, the shareholders were made aware there was a lack of funds and operations would be restricted. The company was forced to sell at a loss, and on 4th June 1914. A sale was agreed with the French company La Compagnie des Forges de Chantillon for £150,000. La Compagnie des Forges de Chantillon didn’t continue any development of Guilford Colliery following the outbreak of the First World War in August 1914.

On 11th June 1917, the Guilford Waldershare Colliery Company Limited was formed. The shafts had been allowed to flood since 1914, and the new owners found the shafts full of water to within 260 feet of the surface. The pumps removed the water and the colliery was prepared for further shaft sinking. In 1920, a power station was built at the colliery, and is now one of the two remaining colliery buildings. A development grant of £350,000 was offered by the government, but it was never accepted by the company. The company had failed to seal off water carrying beds above the coal measures by the ‘cementation process’. By 1921, it was decided that the shafts would never reach the coal measures at this colliery and all further shaft sinking was abandoned. The French company ceased operations in 1929, and the colliery was eventually sold to Richard Tilden Smith, the owner and manager of Tilmanstone Colliery. Tilden Smith had no initial plans of continuing the sinking of shafts at the colliery and ordered the surface materials to be moved to Tilmanstone Colliery.

The mineral leases for Guilford Colliery were acquired with the intention of the coal faces at Tilmanstone Colliery one day reaching the coal. The railway line that lead to the colliery from Eythorne was abandoned on 14th July 1937, and the track bed was lifted to leave just 650 yards as a siding at Eythorne. Over the next few years several of the main buildings were eventually demolished except for the two remaining buildings, which are the power house and a workshop to the north of the old colliery site. The two shafts were still believed to be open in 1989, which were surrounded by high brick walls. The shafts were capped with a thin layer of concrete and earthed over. The power house remained derelict for many years, before it was purchased by a developer and has since been fully restored to become a private home, now called the “Winding House”.

Today the site of the former Guilford Colliery has just two of its original brick-built buildings remaining. One of the buildings, the pumping station, which is now called the ‘Winding House’ and the other building, which was a colliery workshop, is now a storehouse for another private residence. The present owner of the building has lived at the property for just over 10 years. They had finished off what the developer and builders had initially started. Balconies have since been added to make the most of the beautiful views that stretch to see as far as the coast. An Ordnance Survey mark has also been added to the building denoting its height. A surveyor believes the building is constructed from at least 900 bricks. New windows were also added. Due to the present owners wishing to share this important building with the public they have now started a wedding company allowing the building to be used as a venue for weddings and other exclusive functions.