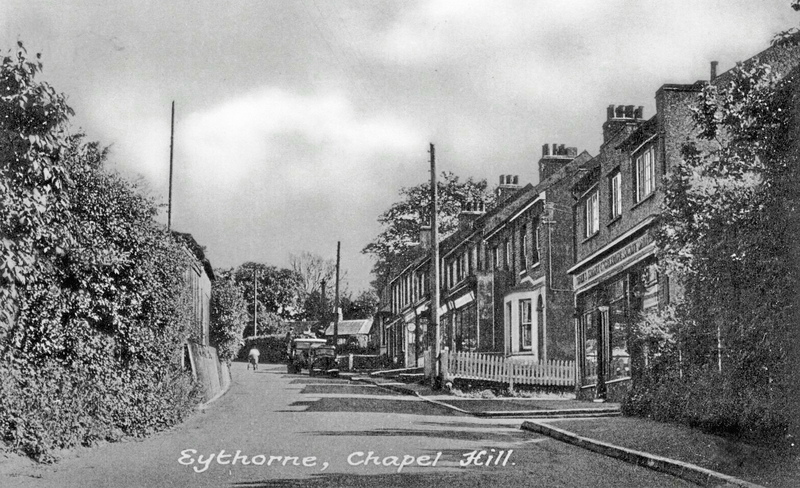 Early in 1920 the River and District Co-operative Society had been looking for districts in which to expand. Eythorne and Elvington had been considered but at that time it was felt that development in the area had stalled and there was insufficient growth in housing to make a new store a viable proposition. In March 1920, the Dover Express carried details of a large piece of freehold land available for sale by auction. The land was ideal for development as it had a frontage of 285 feet to the road which led from Upper to Lower Eythorne. It was close to the Post Office and other shops, was within a mile of Tilmanstone Colliery and so it had potential for housing or other retail use. It was owned by Francis Edward Bromley and Henry Thomas Bromley – members of a local farming family.

The sale was discussed at a General Committee meeting on 1st April and a sub-committee was tasked with inspecting the land and bidding at the auction if the land was thought suitable for a branch shop. They had decided to bid for the land up to a maximum of £550 and they were able to purchase it for £460 on the 8th April. The legal matters were handled by Messrs. Stilwell & Harby and the purchase was completed by 30th July 1920. The Society was undecided about the need for a Co-op Store in the village and so the larger part of the land was rented out for pasture, with a small portion of the land behind Coronation Villas being sold to Alfred Terry.

In November 1923, the matter of a shop in Eythorne was raised again; a sub-committee was formed to inspect other shops and land in Eythorne as well as re-considering the land already purchased. On 15th February 1924, the General Committee decided to go ahead with the building of a branch shop on their own land. The matter was passed to the Works Committee and the Co-op. architects produced a sketch of suggestions and an approximate price of £1250; by March the estimate had risen to £1775 and the work went out to tender. Four tenders were received back and they were opened on 20th June; the lowest tender, with the quickest construction time, was the Co-op’s own Building Department with a price of £2475 1s 8d and that tender was accepted. Work commenced on Monday 30th June 1924 and on 22nd August a tender of £285 was accepted from J. B. Colman & Sons to supply the mahogany shop front.

Matters then turned to the selection of a Manager and on 24th October Walter John Ross, then working at the River branch, was elected by unanimous ballot, with a starting salary of £4 per week. The rooms over the store would be let to him at 10/- per week. By March the staff positions were filled by transfer from River or by new appointments. A Guy motor van would be attached to Eythorne for the delivery of bread and goods to Whitfield, West Langdon, Sutton, Studdal and Tilmanstone.

The opening of the Eythorne branch took place on Thursday 16th April 1925 and it was opened by the Chairman of the Society, Mr W. B. Brett. The store was divided into two departments, and it was the larger one devoted to the sale of grocery and provisions which was opened on that day. It was pointed out that the Society was taking a risk in opening the branch when there was little growth in housing in the area. The smaller department, with its own entrance, was yet to be fitted out and would be a department for drapery (haberdashery and linen), hose (stockings, socks etc.), boots and general outfitters, and heavy goods such as miner’s tools. There was plenty of land behind to allow for expansion if it were needed. In July Miss McLellan, age 25, of Shepherdswell, was appointed for the drapery department at a wage of 35/- per week and the department opened on Thursday 3rd November.

Staffing of the Eythorne branch was a regular problem, with the staff themselves complaining about the amount of work that they had to do to cover staff shortages. Mr Ross repeatedly requested extra staff to help in the stores, with cleaning and with restocking provisions. Often there would be questions asked about stocktaking and the low profits and high running costs of the branch; as an example, additional costs were incurred in paying for bus season tickets for the staff transferred from Dover or River – a three-month ticket typically costing £2 1/- in 1929. Things did improve and in May 1936 all round figures of sales per head of staff in each branch within the River District showed that Eythorne achieved the best sales, being £41 0s 3d per head. This was well ahead of the River branch at £32 1s 3d per head of staff.

Mr Ross continued in position until he retired in March 1944, despite numerous threats to his post due to doubts regarding his managerial skills. He had worked for the Society for 49 years. Mr H. J. Potter, a deputy manager at the Aylesham branch, was made temporary Branch Manager in his place.

Every regular customer had a dividend number and became a member of the Co-operative Society. The number would be noted whenever purchases were made and all transactions were recorded in a ledger. Twice a year, customers could claim their ‘divi’ and would go into the little cashiers’ room at the back of the store, either by going through the shop and down some steps, or by going round to the rear entrance to the shop.

This is based on our research to date. We would be pleased to hear from anyone with corrections or additional information.