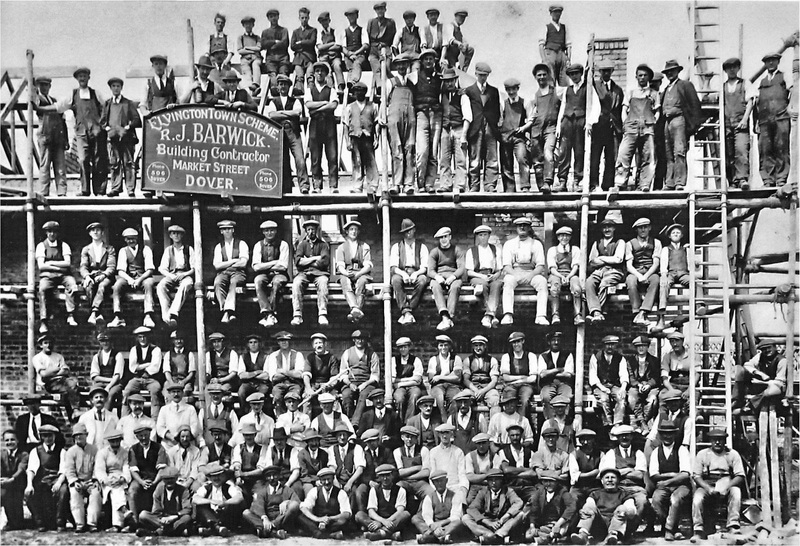 Image shows builders of R. J. Barwick constructing a house at Elvington in 1927

With the discovery of coal deposits below Kent during the late 19th century at Dover, plans were soon made for the exploration of possible further coal seams being viable across the whole of Kent. Boreholes were sunk to start the investigations at specific destinations mostly across the East Kent district, reaching depths beyond 1,000 feet underground. One of the first borehole was dug near the village of Eythorne, and on July 7, 1906 the first wages were paid to the sinkers, who were responsible for digging the shafts to the coal. By July 19, a 14 feet diameter shaft had been dug, later followed by an 18 feet diameter shaft being sunk on November 19, 1907. As work progressed the site was called the East Kent Colliery, which later became known as Tilmanstone Colliery.

Once the coal measures were reached at a depth of 1,560 feet to the Beresford Seam in March 1913, coal was then extracted, which lead to the rapid expansion of the colliery and the need for more workmen. As men steadily came to Kent to find work and the colliery continued to produce coal to the decision was made for further development and expansion of the colliery. Until the arrival of Richard Tilde Smith, who became the eventual manager and owner of the colliery in 1925, the miners and their families had to seek homes in lodgings in local towns and villages. Tilden Smith always emphasised with the miners and their families with not having permanent homes and so went ahead with plans on the creation of a village being extended onto the 32 buildings that were already located a short distance from Tilmanstone Colliery. In the East Kent Regional Survey Plan in 1925, it was suggested that a new town should be built several miles from the colliery, near a railway station in the parish of Shepherdswell.

Tilden Smith continued to express his concern with wanting good comfort for the miners and their families, so arranged for a workmen’s representative to look into the suitability of setting up various housing schemes. One successful scheme saw 102 houses get built, later followed by many more as part of the Elvington Town Scheme. The building contractor responsible for the construction of the houses was R.J. Barwick of Dover. By January 3, 1928, a newspaper article gave the details “The 102 houses at Elvington Village are now approaching completion, and all will be ready for Christmas. Many are finished and in others all that remains to be done is the work of plumbing, painting and plastering. The whole of the drains have been laid, and the septic tank is in satisfactory order.”

There were plans for the electricity supply to the houses to be supplied by the colliery, allowing for house lighting and even street lighting. In March 1928, a temporary school was built to accommodate children from Elvington, Eythorne and the surrounding district. By November 1928 work was almost completed on the Elvington mansion barn, which Tilden Smith had allowed to be converted into a gymnasium, concert hall and other activities. A sports field was also eventually laid out for the use of the Elvington community, which was unveiled by a sister of Tilden Smith on May 15, 1937. The playing field was provided from the Miners Welfare Fund specifically for the men who worked at the colliery and their families, with sports such as bowls, football, cricket, tennis and boxing.