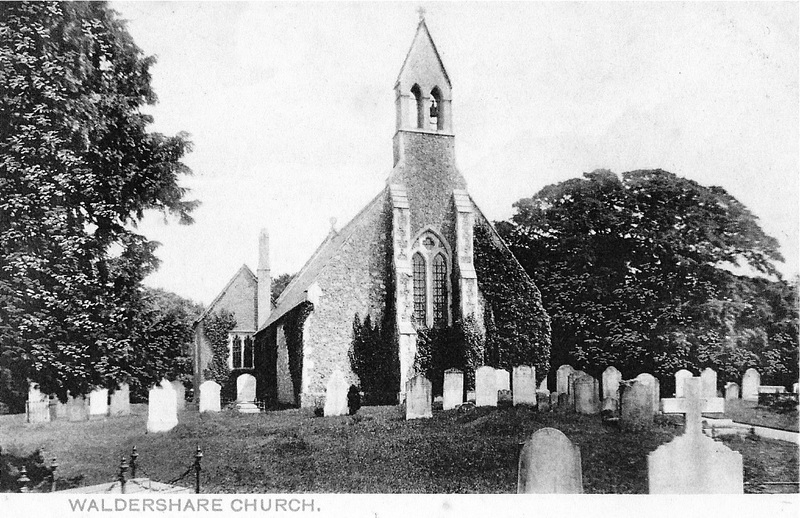 There was a church on this site in Anglo-Saxon times, but there may have been an even earlier building here as Roman pottery, mosaic tiles and other items were found when the church was extended in the 1800s. It is probable the ancient yew trees in the churchyard date from the Anglo-Saxon period, the largest tree in front of the porch has since split into two pieces and half now stands at a precarious angle, supported by an adjacent tree. The church was rebuilt by the Normans; the earliest of the Normans associated with the church is John de Malmaines who is reputed to have been a standard bearer to the Norman footmen at the battle of Hastings in 1066. The Malmains connection continues to this day with Malmains Farm which borders Waldershare. The modest little Norman building was built of local flint rubble and lime rendered outside to protect it from the elements; it was originally much smaller than the present building, possibly only occupying less than one fifth of the current floor area. When Edward Hasted surveyed All Saints, Waldershare in the late 1700’s it was in poor condition and he wrote: “The church, which is dedicated to All Saints, is a small mean building, consisting of a body and chancel, having a wooden turret at the west end, in which hangs one bell. It is almost overgrown with ivy”

The bell in the wooden turret was a gift from Arabella Watson to celebrate her marriage to Sir Robert Furnese in 1714. After its Victorian remodelling, the wooden turret was replaced by a flint double bellcote, but it only contained Lady Arabella’s single bell. Both the bell and bellcote are now missing, the bellcote having been damaged beyond repair when the bell was removed. In the north-west corner of the churchyard, surrounded by iron railings, lies the private burial vault of the Earls of Guilford (although Francis North, the 1st Earl of Guilford, is buried in the family vault at the North’s country seat, Wroxton Abbey, Oxfordshire). The church is accessed via a lych-gate which was erected in 1920 to the memory of the previous rector of the parish, Rev Thomas Hart, who had died two years earlier. Opposite the gate is the grave of Arthur William Moore, a 14 year-old worker who was crushed on New Year’s Eve, 1936 by the moving tubs that brought coal from where it was cut to the bottom of the shaft at Tilmanstone Colliery; he was the only son of William and Winifred Moore of Ashley who are commemorated on the same headstone. Opposite the entrance porch is the grave of 8 year old Greaves Walker who was accidentally shot in 1853 by his friend whilst they were playing with a loaded gun. His headstone records his death was caused by “a gunshot wound inflicted by the culpable impudence of a youth”. In the churchyard are a tomb chest and a headstone of two former servants at Waldershare which are rare examples of memorials erected by a grateful employer. The chest tomb is that of William Hull, who died in 1756 and had been a gardener for 25 years, and the headstone is that of Mrs Elizabeth Harman, who died in 1772 and had been housekeeper for 40 years. Together they have been designated as a Grade II listed building. Francis North, the 6th Earl of Guilford, erected a headstone in memory of a favoured staff member, Robert Willis, died 24 Jun 1838, “a faithful servant”.

At the east end of the church there are two brick-built, barrel-roofed mortuary chapels; the north one is known as the Furnese chapel (built 1712) and the south one is the Monins chapel (built 1697); they are attached to either side of the original Norman flint chancel and were built with bricks made on the estate; they show the evolution of building methods between the two dates. The Monins chapel was constructed using English bond (also known as ancient bond) – i.e. the courses of brickwork alternated between stretchers (lengthwise) and headers (end on). Although it seems a curious decision to attach a brick chapel to the existing flint structure, perhaps employment for Waldershare’s brickworks took priority over building a visually compatible extension and once lime rendering was applied, the mismatch may not have been quite as conspicuous as it is today. By the time the Furnese chapel was constructed, fifteen years after the Monins chapel, the more fashionable Flemish bond pattern of bricklaying was used – i.e. alternating stretchers and headers on the same course of bricks.

During the incumbency of Rev Walter Hamilton, rector from 1856 to 1898, the 7th Earl of Guilford was killed in 1885 whilst out riding with the East Kent Hunt and his widow, Georgiana, Countess of Guilford, wanted to create a fitting memorial to him. In 1886, Ewan Christian, who was architect to the Ecclesiastical Commissioners, was engaged to carry out extensive restoration and updating work on All Saints. Although Christian restored both Carlisle Cathedral and Southwell Minster, he is probably better known for London’s National Portrait Gallery. His “restoration” of All Saints constituted a virtual rebuild of the church at a cost of £714 18s 6d. The nave was massively extended to the west and Gothic form windows, which were fashionable at that time, were placed in unsympathetic juxtaposition with the earlier ones. Indeed, Christian’s touch shows little sensitivity to the original Norman structure and the church interior now reflects a stereotypical Victorian church; since then, there have been two more remedial builds – one in 1902 and the other in 2005, by which time this ancient little Grade II listed country church was again in a poor state of repair. In addition to the extended nave and remodelled windows, much of the 1886 alteration work is still in evidence today, including the ornamentation of the 17th century Baroque altar rails, the introduction of the oak stalls in the chancel, the pews in the nave and the construction of the side chapel wooden screens. Christian was also responsible for the design for the heavy alabaster and stained-glass mosaic reredos with its painted panels on either side (representing the four Evangelists) gifted by the vicar, Rev Hamilton.

The medieval holy water stoup that was once positioned on the east side of the former main door is now only half way along the lengthened nave and the outline of the original doorway is still faintly visible in the overlaid plasterwork. The join between the existing Norman wall and the Victorian extension is very evident in the picture below of the south wall both by the different window forms and the absence of the original lime rendering remnants on the later section of wall. Christian also installed the Porret’s stove which can still be seen at the east end. I can personally vouch for how ineffective this stove was during Sunday School on winter mornings in the 1950’s when our little group of estate workers’ children huddled together around its meagre warmth. There is a well-preserved Norman window in the south wall of the sanctuary which indicates it was once an external wall; it was uncovered when Christian relocated the Monins monument to a less prominent position on the wall of the south chapel. The double-chamfered chancel arch bears the inscription: “We have thought of thy loving kindness O God in the midst of Thy Temple. Alleluia” (Psalm 48:9). Behind the pulpit are the remains of the original piscine dating from the 13th century which indicates the original position of the pre-Reformation altar.

The historian Edward Hasted took particular offence at the stained-glass east window which was in place at the time of his survey, saying: “In the east window are painted several female figures, which seem singularly indecent, at any rate very improper, for the place”. However, in about 1795, Zechariah Cozens, a contemporary of Hasted’s, took an entirely different view, describing this window as “a fine representation of a cock on a wreath”. The Victorian window now depicts The Good Shepherd and is a memorial to Dudley Francis North, the 7th Earl of Guilford, who was killed, aged 34, whilst out riding with the East Kent Hunt on December 3rd 1885. No record appears to exist of what happened to the original chancel window that generated such criticism from Hasted.

None of the original stained glass is still present in the windows; most of it is Victorian with the remainder being early 20th century. The south wall window commemorates Georgiana, the widow of the 7th Earl, who died 13th May 1931. The nave floor has two ledger slabs commemorating two earlier incumbents of Waldershare: Robert Greenall and Laurence Wright. On the north wall are memorials to the men of the parish who died in both world wars. On the floor between the oak stalls are two ledger slabs, one to Sir William Monins (d. 1642) and the other to his wife Jane (d. 1639) and their son Edward, who died the following year. Christian reset these two slabs from their original position to save them from being covered by his newly constructed stalls. Access to the north and south chapels was facilitated by cutting arches into the original Norman flint walls. Christian designed and installed wooden screens in these arches; the lower panels were glazed in 1899 to protect the choir from draughts and in 1903, a glazed wooden frame was constructed on top of those panels to seal the arches completely. During the 2005 repair work to the screens, the glazing was removed to return them to their original Victorian form; at the same time the Victorian diagonal cross-boarding in the roof was replaced by modern horizontal boarding when the roof was retiled.

The 1697 Monins chapel contains a memorial tablet to early members of the Monins family and the Monins hatchment. The chest tomb is a superbly carved, life-sized effigy of Hon. Peregrine Bertie and his wife, Susan, laying side by side touchingly holding hands, a rare display of devotion for that period, and dressed in anachronistic attire which Hasted scathingly described as “conspicuously absurd”. The 1712 Furnese chapel houses a magnificent three tier baroque edifice, the work of the sculptor Thomas Green (1659-c.1730), which barely fits the confines of the chapel and was erected by Sir Robert Furnese in memory of his father, Sir Henry. The monument also commemorates Sir Robert, his three wives and his son, Sir Henry junior, who died in 1734. The Guilford hatchment hung over the mansion entrance (to mourn 7th Earl’s untimely death in 1885? Note the absence of the entrance porch erected in 1890).

The Parish of Waldershare was linked with the Parish of Coldred in 1911. From 1987, the Parish of Waldershare became part of the United Benefice of Eythorne and Elvington with Barfrestone, Shepherdswell and Coldred. The parish of Bewsborough was formed from these churches in 2013. All Saints was declared a redundant church in 1980 and was again in a poor state of repair. According to Journal of the Ecclesiological Society, Issue 30, January 2003 a price tag of £850,000 was attached to the sale of the church, but with the proviso that if there were no buyers, then the church was worthy of preservation for which The Churches Conservation Trust was considered “the prime candidate for future management”. Tentative plans by the church authorities to convert the church into two flats were met with spirited opposition and eventually withdrawn. The Churches Conservation Trust took over the care of the church in 2005. The church is open daily and well worth the visit – other than a few recent repairs, it’s still much as it was when it was the focal point of parish life with the exception that the organ is no longer there; it is said to have been sold to raise funds for the campaign to save the church from being converted into flats.